Use the form above to find your loved one. You can search using the name of your loved one, or any family name for current or past services entrusted to our firm.

Click here to view all obituaries
Search Obituaries
Immediate Need
We are here to help you. If you have need of our services, please call us, day or night, at:
651-455-5352
To better prepare yourself, we have provided you with some helpful information regarding the immediate need process.
Contact Us / Location

In Memory of
Mervin LeRoy
Munkholm
1935 - 2020
Click above to light a memorial candle.
Memorial Candle Tribute From
Frontrunner Professional
"The lighting of a Memorial Candle allows visitors to leave a symbolic gesture of"
View full message >>>
Send Flowers
Plant a Tree In Memory of Your Loved One
Click Here
Menu

In the event that there is an error
in the information presented,
please contact the funeral
home by clicking here. 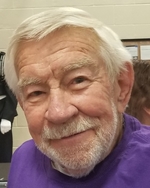 Mervin was born on the family farm in Nye Wisconsin on January 4, 1935. He attended a one room country schoolhouse during his grade school years. He was a very involved member of FFA and won many ribbons for his gardening skills. It was often said by his mother Alma, if she couldn't find him as a child, she would look for him in the garden. This was a skill and a love that continued throughout his life. Mervin graduated from Osceola high school in 1953 and after graduation joined the Air Force. He spent four years in the service and was stationed in Japan and also at Travis Air Force Base in California. He met his wife Jayne, of 60 years, on a blind date in October of 1958 and they were married August 22, 1959. They bought a home in South St Paul, where they raised their three daughters and where he continued to live, until his passing. He retired from the Veterans Administration Hospital after 34 years of dedicated service in 1995. Mervin enjoyed spending time at their lake cabin in Danbury, Wisconsin. He had a deep regard for nature and at the cabin, he often could be found pontooning, gardening, watching and feeding the wildlife. He also had a great love of dogs that started in his childhood and stayed with him his entire life. His last dog Summer was his constant and faithful companion until her death two years ago. Mervin was very proud of his Danish heritage and the Danish flag could often be seen flying at the cabin. He was a 37-year cancer survivor and was active in Relay for Life activities. Mervin passed away peacefully at home on May 28, 2020. He is survived by his dear wife Jayne, beloved daughters Kim (Scott) Burress, Debra Munkholm and Darla Munkholm; precious grandchildren Ryan Munkholm and Jennifer Burress. Also survived by sisters-in-law Ila Munkholm and Darlene Munkholm and many other relatives and friends. He is preceded in death by parents Nels and Alma Munkholm, brothers Harold (June), Everett & Paul and sister Helen (Vince) Schadegg. A private family service will be held. Interment Ft. Snelling National Cemetery.
Printable
Share on Facebook
National Funeral Directors and Morticians Association
Obituaries
About Us
Our Services
Funeral Planning
Grief & Guidance
Proudly Serving the Communities of South St. Paul, Inver Grove Heights, West St. Paul & Surrounding Areas.